Dear Reader or I Want! 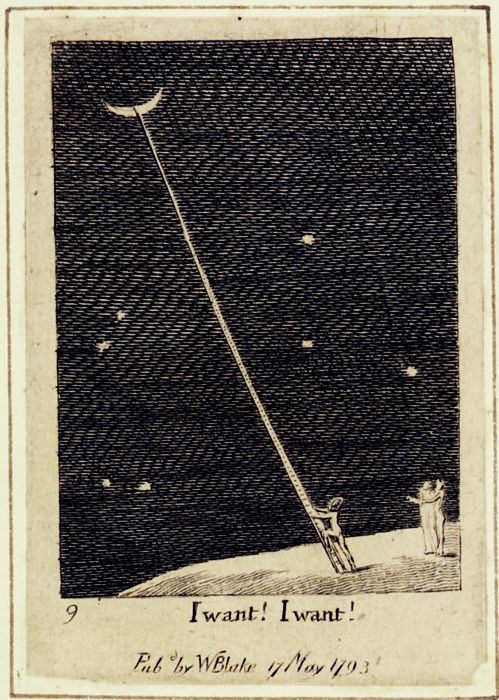 William Blake, I want! I want!

I’ve been obsessed with the poem Dear Reader by James Tate for some months now. I forget how I came across it—probably someone posted it on twitter. I linked to it on facebook, asking for interpretations, discussions but didn’t get any takers. I wonder why. Do responses from writers expose too much? Do readers have to address too many uncomfortable questions like, why am I shut up in a casket? why am I being hated here? I have said I am obsessed with it. I guess I just exposed myself. I do indeed have wishes for my poems and these emotions can be strong. But I don’t express them in the poems and don’t consider it my business to do so. Neither do I hate the reader, I’m pleased to say. Below are my impressions of the poem.

I’m attracted to, or I should say I recognize its ambivalent tone. I imagine many writers would recognize it. The last couplet: both halves will consume a person. “Eaten by the moon” I take to refer to one’s desires: being “eaten” by one’s yearning, here the yearning to somehow embrace a reader, which is impossible, and hating oneself for yearning for the impossible.

Some of the terms and phrases are shocking. To pry open the casket of a reader, as if to say to the reader: you are dead to me/why are you dead to me? The utter impossibility of a living connection to the reader.

Not just a snowflake, but a burning snowflake. One recalls Frost’s, “Like a piece of ice on a hot stove the poem must ride on its own melting” from the essay, The Figure a Poem Makes. Frost is referring to the form a poem takes as it comes into being. Like paint dried on the canvas of a good painting, a well-crafted poem will “always” stay fresh (here I disagree with Frost. He says “forever” but I say everything has a shelf life). It’s a sort of paradox: the movement that produced the poem is gone, used up like a piece of melted ice, but the trace of it—the poem or painting itself—is always there (frozen as it were like a piece of ice or dried paint). This way of viewing a poem is especially true of Frank O’Hara’s poems, I think. Ashbery wrote about how his friend didn’t keep good track of the poems he wrote “because his thoughts were elsewhere, in the urban world of fantasy where the poems came from.” But I digress. Tate plays on this, but his “burning snowflake” puts the emphasis on the urgency of making the poem and he’s trying, with a high degree of frustration, to transfer this urgency to the act of reading. Unfortunately, this is not the writer’s business.

The making, the urgency of the making, keeps coming on like sleet. The maker “can barely see” because he’s getting the writing part of the process (the only part in his jurisdiction) confused with the reading, the part of the process he has no claims on and can have no point of view on (apart, that is, from his subjective point of view as one reader among others). The writer is not in a position to see it.

“If this trick works”—what trick? Is this poem, Dear Reader, this attempt to address the reader going to break through an impossible barrier? Does he really hope for this?

With the words, “I don’t know” he’s finally beginning to tell the truth—to himself, that is.

The writer wants what the writer wants. He wants the ice of the poem to light a fire of recognition in the reader. Sometimes it happens and sometimes it doesn’t. A reader may respond to a writer—send a fan letter, say a few words at a book signing, write a review—but reading and writing are like two halves of a coin: if you’re “heads” you’re on the wrong side to see “tails”.

Isn’t it a little bit outrageous to want to be on both sides? The poem may be a love letter, but all the writer can do is send it out. The rest is not his business.

7 Responses to Dear Reader or I Want!