Georges Bataille: Improvisation Within a Field of Contradictions 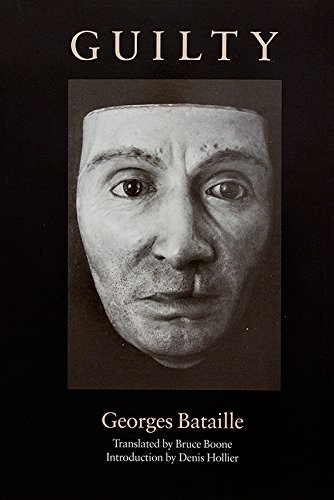 …. two movements…. One’s in harmony with nature; the other questions it. We can’t do away with either. [109 Guilty by Georges Bataille]*

“We do not have the right to wish for a single state. We have to desire to become periodic beings: like existence.” (The Will to Power) [135 On Nietzsche by Georges Bataille]

There’s a passage in Guilty in which Bataille quotes from Stendhal’s journal, and he states:

“What I am can’t reach Stendhal now that he’s dead. And who will ever do more for me than I’m doing for this dead man?…. I’ll die like a spent wave…. Meantime, in my bed I’ve dozed off. I wake up…. I write, hoisting myself up to the pinnacle of this writing like a flag…. [112 Guilty]

In Bataille’s mind the world did not “resemble a separate or circumscribed being but what goes from one person to another when we laugh or make love.” [45 Guilty] Not quite when we write. Then the flow is only in one direction (although if you, as a reader, are enjoying the writing of a living person and have not bought their books and/or let them know their work has enriched your life, I have to ask, why not?). I cannot do anything for Bataille, since he is dead, but he can still help me. For a long time I was not in a position to adequately appreciate the diaristic, fragmentary works, Guilty and On Nietzsche. Since my brush with death last year and its constant reminder this year I am better able to understand where this writing was coming from. I jump into these books as into a fast-flowing river—here, there, anywhere—come out, bask in the sun dripping, refreshed and dive in again when I’m ready.

If I utter a word, I bring into play the thought of other people. [108 Guilty]

How painful it is at times to speak. I love, and it’s my torment not to be intuitively understood but to be impelled to find words, words still dripping with lies, steeped in the bitter residue of the times. It makes me feel nauseous to add (fearing serious misunderstanding), “I take myself lightly, not seriously.” [144 On Nietzsche]

I wonder if Bataille hated the idea of being misused the way Nietzsche had been, and if this hatred informed his use of certain terms, particularly “evil”. Surely the word “evil”, like the word “God”, is one of the most loaded in language, weighted down with calcified meanings that no longer function in thought but on the contrary block its flow like a blood clot. And yet Bataille was determined to use this word as a key term in his thinking. It’s as if he deliberately cut most readers off at the pass. Every time one comes across the word in his writing one is forced to pause, as if coming against a wall, and proceed very carefully. I imagine most readers are repelled. And I can’t imagine Bataille was unaware of this. Like Nietzsche he must have wanted a select readership who proceed slowly and carefully. As for the rest (most), let them be repelled and take comfort in their Ding an sich, their answers without questions, crippled while claiming to fly.

I am still puzzled by Bataille the bad poet. Certainly his attitude toward poetry was contradictory. He wrote:

Art constitutes a minor free zone outside action, paying for its freedom by giving up the real world. A heavy price!…. The province of the arts in a sense encompasses totality, though just the same, totality escapes it in all aspects. [xxxii On Nietzsche]

Truer words on poetry have not been written. He also wrote,

I use language in a classical way. Language is an organ of will (action comes from it), and expressing myself is a function of the will, which continues on this path till the end. What would it mean to speak of relinquishing will in an act of speech if not—romanticism, lies, unconsciousness, and poetic messiness?

To me the most radical, valid thing is to bring intentional movements into opposition with the innocence of ecstatic laceration. [111-112 Guilty]

Shall we say that art is outside action, but can inspire it? And is a contrast being made here between a literary game such as Surrealism and the obliteration of ego he constantly refers to in eroticism or laughter? But, in terms of language, to use it “in a classical way” while bringing a lucid regard to such “ecstatic lacerations”—is this not an approach to writing available to the poet, whether or not one stretches “in a classical way” to mean any order or form brought to language? Perhaps Bataille never really settled the question in his mind. For we find him in these books lapsing into poetry and whenever he does he strikes a flat note. I’ve selected this example at random:

black
quiet I invade the sky
my black mouth
is an arm
the blackness of
writing on a wall
in black flames
empty winds from a grave
whistling about my head.
[81-82 On Nietzsche]

It is all of that quality. In communicative terms the poem is opaque, almost obtuse. We see what it conveys, but in a cartoonish way, not because it has been stripped of color but because of its blunt language. It rings flat and we’re unmoved.

Bataille’s critics accused him of talking and writing endlessly about laughter and yet failing to make them laugh. True enough an artist would know how to make them laugh. But maybe they would have seen the possibility of the laughter Bataille wrote about if they understood it the way he did. This was not a laughter to run toward like balloons and cotton candy. It could not be triggered by a tickle or a joke, nor was it sophisticated. One cannot make someone laugh such a laugh.** It is an experience unique to each individual. Personally, I have only glimpsed such laughter and to tell the truth I am not a little afraid of it. It is too close to madness. Yet I wonder—if I am not able now to practice joy before death will I be able, in the last moment, to give myself over to it—not to death (that we must do) but to joy before/in the face of death?

Perhaps a more fruitful criticism would have taken aim at Bataille’s approach to and attitude toward poetry. No one understood poetry better than Bataille did, yet he apparently could only write it when he wasn’t trying to. In the prose immediately following the poem cited the harrowing reality of what he is writing about comes through as clear as Tristan Tzara’s bell:

I can’t keep endlessly accepting this infinitely monstrous sterility which fatigue brings to my life…. sometimes I bitterly eye the worst, I stake my bet, helplessly slip into horror. I know all is lost. And I know that dawn, a potential illuminator, will cast its light on a dead man.
Inside me everything laughs blindly at life. Buoyant like a child: walking through life, carrying it.
I hear the rain falling.
My depressed state, the threats of death, some kind of destructive fear that also shows the way to the summit—all these whirl in me, haunting and choking me . . . But I am—we are—going to go on. [84-85 On Nietzsche]

Often, when it’s not a question of writing poetry at all, his prose becomes poetry:

Admitting Nietzsche’s defeat and blind error, his impotence.
A bird burned up in the light. The stench of scorched feathers.
Human intelligence is weak, it sallies forth in battle.
Which isn’t a situation we can avoid.
So. We expect love to be a solution—for infinite suffering. And what choice do we have? Within us the anguish is infinite, and we fall in love. Is there some other alternative?—other than comically making love on a Procrustean bed? Infinite anguish!

The only strict and honest path.
Making no finite demands. Conceding no limitation—regardless of the way chosen. Not even when striking out toward infinity. Demanding of an individual that this person be whatever he or she is, or will be. Knowing nothing except fascination. Never stopping at the apparent limit. [105, On Nietzsche]

Even though, in this way, we constantly come up against our limits, and must be cognizant of the fact: “Just as in the last analysis the summit is simply inaccessible, from the start, decline is inevitable.” [39 On Nietzsche] And what of all this activity that we have no choice but to engage in if we want to live fully?

But beyond any conditions for doing or making, knowledge finally appears as a deception in relation to the questioning that impels it. When questioning fails, we laugh. Ecstatic raptures and the ardors of love are so many questions—without answers—to which nature and our nature are subjected…. By leaving open such questions in me like a wound, I keep my chance, I keep luck, and I maintain a possible access to these questions. [47 On Nietzsche]

I can make my life an ongoing evocation of possibilities. [149 On Nietzsche]

Again and again, it is a matter of living as a form of improvisation within a “field of infinite contradictions”. [xxiv On Nietzsche] Joy, pain, laughter, ecstasy and despair—it is all, like nature, mixed up together.

When all is said and done, I have more than one face. I don’t know which is laughing at which. [68 On Nietzsche]

** Such laughter is rare in the arts. Offhand only two examples come to mind—both from film—that in my understanding bear a resemblance to the laughter Bataille wrote about. The first and strongest example comes at the end of the David Lynch film Fire Walk With Me when Laura Palmer weeps and laughs simultaneously (the whole film in my view is close in spirit to Georges Bataille). The second appears in the Terrence Malick film The Thin Red Line when a soldier whose every thought and prayer is for his wife, whose every action—including heroic ones—is the fruit of his love—when this soldier receives a Dear John letter, and we see him suddenly lost, the ground beneath his feet gone, turn a piece of paper with handwriting on it over in his hand and begin to laugh. Now, when we watch these scenes do we laugh? Of course not. We stare in fascination.

6 Responses to Georges Bataille: Improvisation Within a Field of Contradictions