Conrad Aiken and the Anthropological Machine

Linnaeus’s genius consists not so much in the resoluteness with which he places man among the primates as in the irony with which he does not record—as he does with the other species—any specific identifying characteristic next to the generic name Homo, only the old philosophical adage: nosce te ipsum (know yourself)…. It is worth reflecting on this taxonomic anomaly….

If the anthropological machine was the motor for man’s becoming historical, then the end of philosophy and the completion of the epochal destinations of being mean that today the machine is idling.
—Giorgio Agamben

It seems to me the “idling machine” that Agamben writes about in The Open is illustrated in the works of Conrad Aiken. In the circle of consciousness that operates in all of Aiken’s works, we see an imaginative articulation of the human as adjustments in his relationships are constantly made, next to, or interrupted by more or less florid, more or less beautiful passages one might describe as “poetic” or more unflatteringly as a deer granted the gift of language caught (willingly or no) in a beam of light.

To begin with, The Scofield has provided an invaluable service in reintroducing the work of Conrad Aiken to contemporary discussions of consciousness and humanity. I’d like to note a few questions that have already arisen in my mind as I work my way through the issue, and then bring it together with the words of Agamben.

In a provocative essay entitled, Toward a Copernican Word, Conor Higgins outlines the relationship between Aiken’s novel Great Circle and Freudian psychoanalysis. In citing the three great ideas that have thrown man out of the center of the universe, which can be summed up in the three names Copernicus, Darwin and Freud, Higgins situates Aiken in his novel as occupying a radically decentered zone in which man, in the representative of the novel’s protagonist Andrew Cather, unable to know himself or control language, “can only hope to regress, to return to the pre-verbal, where his memories and his body have not yet been bound by knotty words”.

While I don’t exactly disagree with the letter of what Higgins writes, I think the spirit of it is off by exaggeration and unbalanced emphasis. Higgins cites some of the most painful wounds Cather experiences, none of the positive insights. Therefore Aiken’s novel offers a wider circle of understanding than Higgins’ conclusion suggests. I think we see in Andrew Cather a struggle toward a certain stage of self-awareness already obtained by its author. It’s not as though Aiken is living through the experience in the act of writing the novel, that Cather’s experience is simply a mirror reflection of Aiken’s own. Indeed, as Higgins writes, “The narrative doesn’t read entirely as an act of remembrance, but rather as an act of invention, enlivened by the poetic language of the protagonist”. Yet he echoes an earlier reviewer of the novel in agreeing that the author’s struggle is the protagonist’s struggle, as indicated by the “blurring of the authorial point of view”. But this does not give a full enough account of that “act of invention”—as we see it in Cather, and as that reflects back on the author.

Aiken illustrates Cather’s condition and struggle, and in the process indicates flashes of authorial awareness, a stage of self-understanding that Cather is on his way to achieving. Aiken paints a portrait of Andrew Cather from the inside, as a struggle of consciousness. Artistic deliberation indicates a level of control, certainly. But more to the point, we are looking at the difference between a lack of knowledge and control and awareness of non-knowledge and non-mastery. That awareness is all the difference. It determines a whole new set of questions based on what relationship one is to have to one’s limits, to the dynamic interplay between knowledge and non-knowledge, between what can and should involve action and when it is best to let go.

…. the past Andrew Cather, who has now suddenly and painfully told the present Andrew that there is also a future Andrew. Murder him, if you like, but he is yours. [The Collected Novels of Conrad Aiken, p 287]

In fact we see Cather by the end of the novel in a state of exhilaration, fully aware that he is embarking on a journey into the world based on a refreshed understanding of his relationship with it. He realizes that it’s not really necessary to go back to his childhood home, that he is already there in the sense that he has already learned the lesson he wanted to learn by going back. The novel does not dissolve into tragedy, collapse, or regression. In fact it is about discovery: that one’s control as an adult involves an ongoing effort to negotiate a path via one’s dynamic relationship with the world based on vigilant awareness of one’s limits.

The Scofield issue also includes Aiken’s great poem, Palimpsest: The Deceitful Portrait. It is actually a segment of the much larger poem The Divine Pilgrim. It appears as the first poem in Aiken’s Selected Poems, and since the author chose these himself I’m supposing the title is his own. I think the poem has never been more relevant. One thinks especially of social media when reading it. However, it’s original scope remains far larger and more profound: it involves all of our human relations. It is here that we find Aiken’s great description of consciousness as “the small bright circle…. Beyond which lies the dark”.

Aiken’s image of consciousness begs to be compared to Julian Jaynes’ famous description of searching for consciousness:

It is like asking a flashlight in a dark room to search around for something that does not have any light shining upon it. The flashlight, since there is light in whatever direction it turns, would have to conclude that there is light everywhere. And so consciousness can seem to pervade all mentality when actually it does not.

We do not have to make this mistake. However, if we want to avoid this mistake we do have to come face to face with our limits, and this is what Aiken’s poem asks us to do. The darkness outside our circle of consciousness insinuates itself at every step. How can we know all when the circle of knowing is so small? How much can we know of anyone, or even ourselves? Aiken writes, “If you could solve this darkness you would have me.” The great question implicit here is of what relationship we are to have with the world knowing that the outer darkness walks with us every step of the way.

The poem remains ambiguous. We are not quite sure if the speaker deliberately “withhold[s]…. the one dark wound that guides [him]” or if it is withheld from him. Either way the surrounding darkness, the unknown, non-knowledge will forever be a counterpart to our consciousness.

And here I would like to compare the “darkness” of Aiken’s poem with the “saved night” in Giorgio Agamben’s fascinating book The Open: Man and Animal.

Just as Titian’s lovers forgive each other for their own lack of mystery, so in the saved night, life…. stands serenely in relation with its own concealedness; it lets it be outside of being.

That which is at stake in man’s relationship with the unknowable is nothing less—in terms of humanity—than the possibility of a new kind of relationship to each other, to the other creatures of the earth, and to the earth, our Mother, herself. Scaling it back down to the individual, each person has to decide what their relationship with the outer darkness is going to be. But what I love, what I find supremely beautiful, is Agamben’s insight into the lovers in Titian’s paintings. 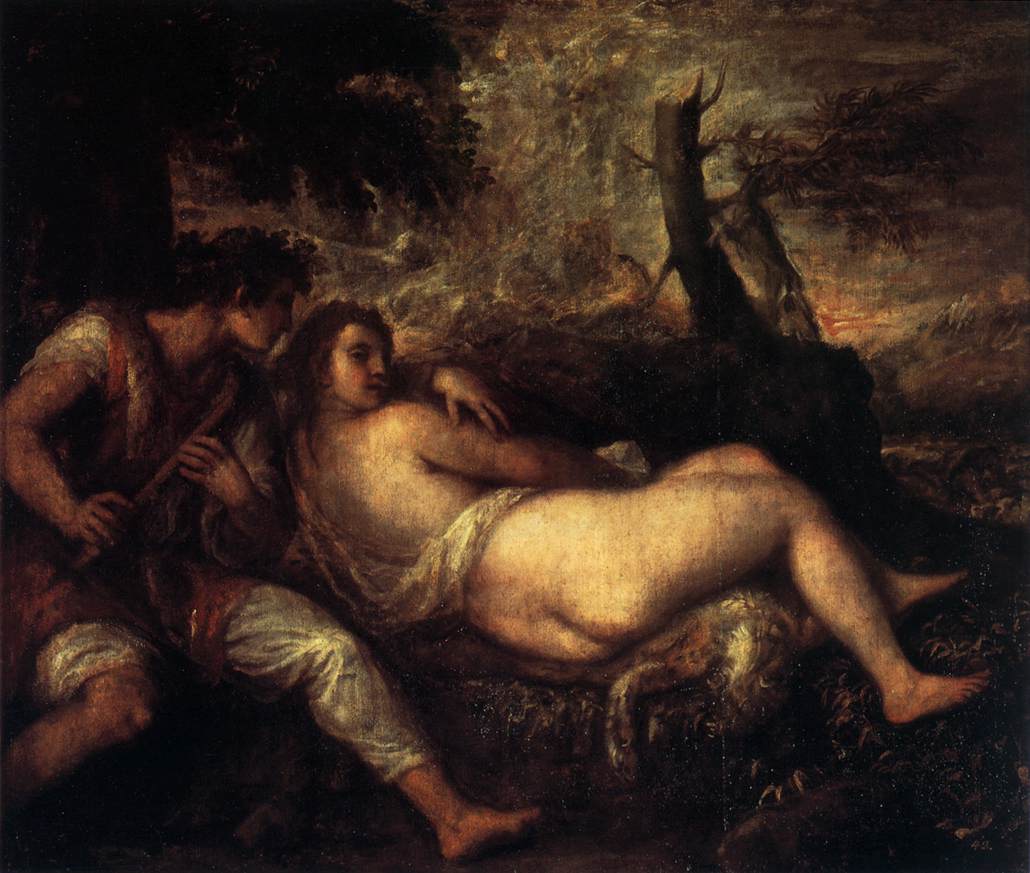 the lovers learn something of each other that they should not have known—they have lost their mystery—and yet have not become any less impenetrable. But in this mutual disenchantment from their secret, they enter…. a new and more blessed life…. These lovers have initiated each other into their own lack of mystery as their most intimate secret; they mutually forgive each other and expose their vanitas…. In their fulfillment, the lovers who have lost their mystery contemplate a human nature rendered perfectly inoperative…. as the supreme and unsavable figure of life.

This passage should be set next to another to elucidate the issues we’ve already been introduced to by Aiken:

Homo sapiens, then, is neither a clearly defined species nor a substance; it is, rather, a machine or device for producing the recognition of the human…. able to function only by establishing a zone of indifference at their centers, within which—like a “missing link” which is always lacking because it is already virtually present—the articulation between human and animal, man and nonman, speaking being and living being, must take place. Like every space of exception, this zone is, in truth, perfectly empty, and the truly human being who should occur there is only the place of a ceaselessly updated decision in which the caesurae and their rearticulation are always dislocated and displaced anew. What would thus be obtained, however, is neither an animal life nor a human life, but only a life that is separated and excluded from itself—only a bare life….. To render inoperative the machine that governs our conception of man will therefore mean no longer to seek new—more effective or more authentic—articulations, but rather to show the central emptiness, the hiatus that—within man—separates man and animal, and to risk ourselves in this emptiness….