Posted on September 22, 2013 by Mark Kerstetter

I went through a period of calling every picture I made a portrait. This attitude reflected a paucity as well as a plenitude. It began with the consideration that a portrait says more about the artist than the sitter—so let’s call all portraits self-portraits. By that logic, I thought, all paintings were self-portraits, since they always say more about the artist than the sitter.

These hasty assumptions were part of a thought experiment. I was nineteen and felt like I could never really know another person, maybe not even myself. Phrases like “innermost self” and “search your heart” troubled me because when I did so I reached a point of pure absence.

“Suspect”—This pencil sketch and the following works were made at the time.

Rather, it felt like a hole. I’d go so far in my interior investigation and always come up to a hole letting me back out into the world again. Was there no “innermost self”?

This portrait in watercolor and pencil was based on a girl I knew, but any distinguishing features seemed to have been scribbled or written over.

It seemed to me then that the only things I could really know were physical things. I was never a very scientific thinker, but it didn’t take long to decide that physical things were as elusive to the grasping mind as people and the self were. Ultimately I could not know why I/my body and a table, the floor or a knife should begin and end with absolute boundaries flush against one another. Why isn’t it all just one thing? In other words, I touched a sense of the sacred or of cosmic unity in the form of profound doubt. Perhaps I should add that this was shortly after losing faith in the Christian God. 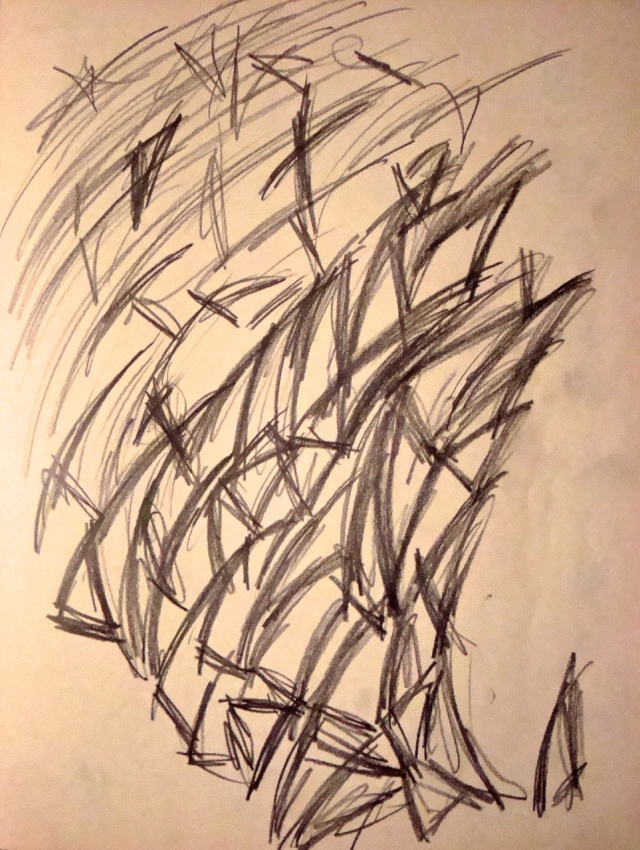 I experienced a moment of destabilization in which either madness or magical thinking became a possibility. Objects became luminous and alive. Chairs held a particular fascination because, mundane like shoes, they always suggest a human occupant. I drew lots of chairs, always calling these drawings portraits. A drawing of two chairs with their backs to each other was a portrait of my doubt: human via the absence of humanity and the inability to know anything for certain. Sometimes they were stylizations like this one:

Other times they were agitated, as if this were a nervous attempt to evoke motion in static objects, to force a human connection through expression. At the very least it came out of my feeling that my responses to the world were somehow more real to me than the world itself. No doubt I needed to get out of myself, but I had further to go….

My drawings got looser

Man in a Hat, pastel

and looser until I experienced a strange return to childhood with the lucidity of an adult: 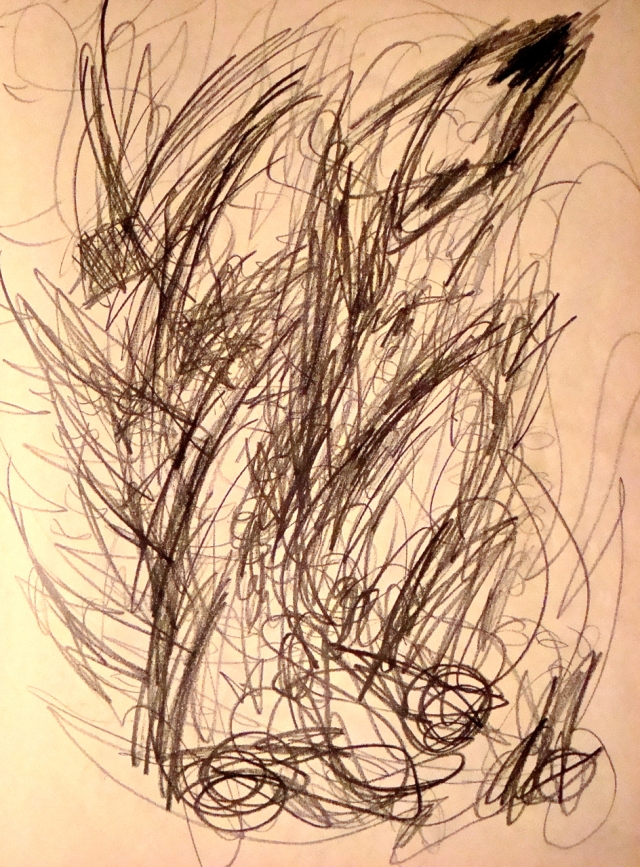 Here are three examples of my poetry from this time. Barney’s Heart refers to Barney Clark, the first person to be successfully fitted with an artificial heart. Too Strong to Dream, too Weak to Fly is constructed around a sales slip with words by Whitman, Kafka and James Thurber.

Bob ‘n Susan got married.
There’s a new puppy in the old house
wrapped in somebody’s too-large flannel shirt.
The sound of a voice was,
if you’re that tired why don’t you
lie on the floor?
It’s dirty
and it’s also green
but not like grass.
There is chaos here.
I am never where I’m
but I would be.

Too Strong to Dream, Too Weak to Fly

All merchandise returned for credit, refund, or exchange must be in new and resalable condition, in original cartons with original packing, accessories, guarantees and instructions, and must be accompanied by this sales slip; everything begins with lucid indifference.

ORGANIC (or – gan ́ ik)
1. Of, pertaining to, or of the nature of animals and plants. 2. The little one sleeps in its cradle, I lift the gauze and look a long time, and silently brush away flies with my hand. 3. The lady by the doorsteps over there, who had up to now been contemplating her shoes, which were quite visible under her tightly drawn skirt, now looked at him. She did so indifferently, and she was perhaps, in any case, only looking at the falling rain in front of him or at the small nameplates of firms that were fixed to the door over his head.

The instructor, noticing my activity, came back from an adjoining desk, a smile on his lips and his eyebrows high in hope. He looked at my cell drawing. “What’s that!” he demanded, with a hint of a squeal in his voice. “That’s what I saw,” I said…. “That’s your eye!” he shouted. “You’ve fixed the lens so that it reflects! You’ve drawn your eye!”

This entry was posted in drawing, personal essay, poem and tagged Barney Clark. Bookmark the permalink.