Posted on September 18, 2013 by Mark Kerstetter

People are always calling me a mirror and if a mirror looks into a mirror, what is there to see?—Andy Warhol, The Philosophy of Andy Warhol

There are artists we come to early in life, embrace right away and absorb into the fabric of our psyche. That’s the way it is with me, anyway. Van Gogh was such an artist for me. At seventeen I carried his biography around everywhere I went. And sometimes, for whatever reason, such an artist recedes below the conscious mind. I have lived with Van Gogh like a piece of old furniture hauled from one place to another over the course of many years. 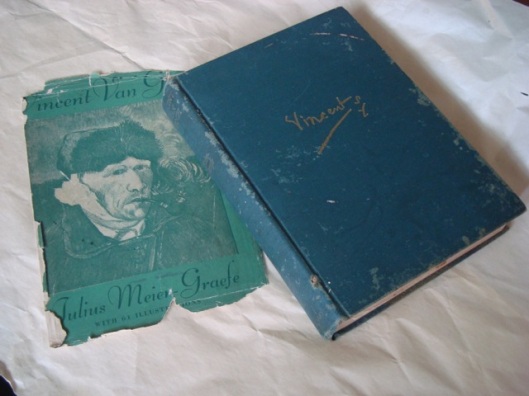 It’s a part of me, but I don’t look at it every day. When I do, I fall into its familiar contours like a beloved chair. I know it will stay with me.

There are other artists that, despite the feeling that we know them, very gradually grow larger in our consciousness. Egon Schiele is such an artist for me. Everything about Schiele is so ostentatious, so over-the-top that I felt for a long time that I got what he had to offer, that there was nothing subtle to chew or grow on. But I was wrong. The more I have seen and the more drawings I have made the larger his example becomes in my mind, until I can say I know of no one in history who could draw better (and his paintings aren’t too bad, either).

And then there are artists we don’t hit it off with right away, that we have to make varying degrees of effort to appreciate. De Kooning and, believe it or not, Picasso were such artists for me. It might be mentioned that there are others we never fall in love with, no matter how beloved by others (Rubens and Jeff Koons—cherubic rococo pizazz in general—don’t turn me on).

But Andy Warhol doesn’t fit into any of these categories. He’s always been a stimulant to me, and sometimes an irritant, but a constructive one, like a ball in a spray-paint can. Looking at his work I don’t like it a hell of a lot, and never have—with a few exceptions—the Gold Marilyn, the cow wallpaper show with the silver helium pillows and the Mao exhibit, to give three examples in his vast oeuvre. 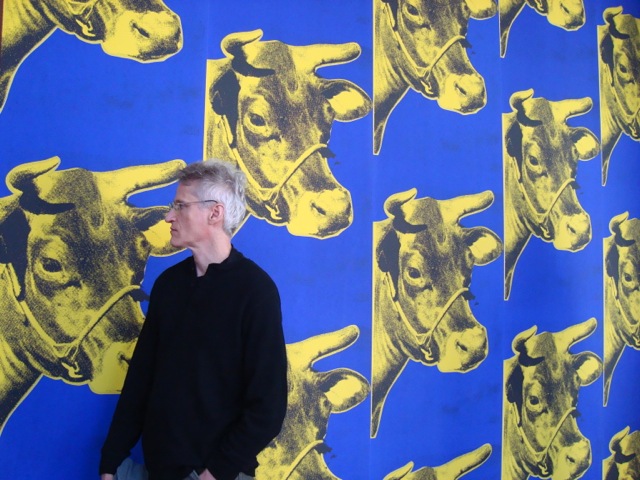 That’s not a silver helium pillow, that’s my head

I find Warhol inescapable. For anyone even casually interested in the contemporary arts, Warhol is there at every turn, waiting for you. You have to come to terms with him at some point. Warhol has always been an itch I’ve had to scratch.

It has been said that it’s impossible to look at Warhol’s work without thinking. That’s true, but I’ve always felt like I’m trying to organize my thoughts. That’s due, no doubt, to my limitations, but I think it’s also because of how complex it is to think about Warhol. His enigma shines as brilliantly as the unstoppable machine of his ideas, or rather idea—together these twin elements comprise the flaming star that is the Andy Warhol Idea—an idea that continues to inform everything we do, everything from popular and commercial art to internet culture to every aspect of the visual arts.

How can Warhol occupy such a large part of my consciousness when I’m lukewarm to the actual objects he made (or manufactured)? The short answer is that he was a conceptual artist. But he was a conceptual artist like no other. Conceptual art, as a genre of modern art, took off about a decade after the beginnings of Pop art and is characterized by the supremacy of the idea, intellectual data, or language itself as the content of art. The whole point of conceptual art was to think, and in thinking, discuss. Implicit in the ongoing discussion that Conceptual art consisted of was the ongoing question: what is art? It could therefore be said that Conceptual art is the philosophy of art as art. Conceptual artworks often involved language (or were comprised completely of language). They sometimes looked like geometry or weird installations, performances or even scientific experiments. But they always looked like Conceptual artworks in the sense that you knew you were supposed to think about them and discuss them. Warhol’s work doesn’t look like Conceptual art. It doesn’t look like you’re supposed to think about it. On the contrary, it often looks downright stupid. A bunch of mock Brillo boxes in a gallery? An eight-hour film of the Empire State Building? Marilyn Monroe repeated fifty times? Some people claim that Warhol was stupid, and some are nasty about it. Can there be any middle ground between Morrissey’s claim that Warhol did nothing and thought nothing and Lou Reed’s that he was always working and thinking? Perhaps it can be found in the eye of a hurricane. As Carter Ratcliff wrote, Warhol “is more like a still center, a mirror in front of which we and the entire culture strike our various attitudes.” [Andy Warhol, p 26] We look in a mirror, see ourselves, and if we don’t like what we see we begin to embellish and invent. The fact that Warhol’s images relentlessly refuse to be anything other than surface forever asserts this process, without rest. Ratcliff contrasts Warhol’s relentlessness, which he ties to the artist’s integrity, with Lichtenstein’s slick aesthetic, which can comfortably be drawn in line with the “good taste and high style” of early Modern masters. [p 23] Warhol’s work is made to be uncomfortable, even as it strips iconic images of their power.

Warhol resembles Duchamp more than other Conceptual artists. Duchamp, of course, made the decisive gesture as R. Mutt, in effect inventing Conceptual art as a genre. Beyond the gesture they both continue to be cultural irritants as well as artists whose gestures are repeated by others. But such imitation misses the point. Duchamp would have wanted people to think for themselves and Warhol’s repetitions of other artists or images were subversive acts at the same time as they were celebratory. Always with Warhol, determining where one begins and the other ends is a challenge. Mere imitation has always been anathema to the art spirit.

Everyone should know by now that Warhol cultivated his famous persona, and the remarkable thing is that he built it out of what he himself considered to be weaknesses: his shyness, his pale skin and thin hair, his lack of glamour. He did this even as he turned the mechanism of capitalism into art. This is the very image of empowerment. The simple facts of Andy Warhol’s career are astonishing. Soon after arriving in New York City, Warhol had become a successful commercial artist and within ten years he was one of the most sought out, and richest. Surely he must have been dreaming all those years about exactly how he would make his move into the fine arts, but as far as I know this process is not documented. All we know is that he abruptly stopped being a commercial artist and just as abruptly became a fine artist. And the fine artwork he began making could not have been more different than his commercial artwork. Just as striking was the transformation of his persona. As a commercial artist Warhol was the supreme professional, always giving his clients what they asked for, and more. He had become a cultural sophisticate, with season tickets to the opera. After his Pop art transformation, it was rock ‘n’ roll, black jeans and sunglasses and the ultra-cool gee-whiz deer-in-the-headlights routine. And he never stopped. He has always had his detractors, but there was never a serious low-point in his trajectory, just bigger and bigger until he took his place between Elvis and Marilyn.

Andy Warhol made certain that his persona would live on. He invented his own myth. But the objects he left behind are problematical. Because his process devalued the notion of the handmade object, his works are not easy to authenticate, and forgeries abound. More than most artists in the history of the modern era, he is an example that the works left behind are always artifacts, traces of a human flame that burned so briefly.

5 Responses to Impressions of Warhol